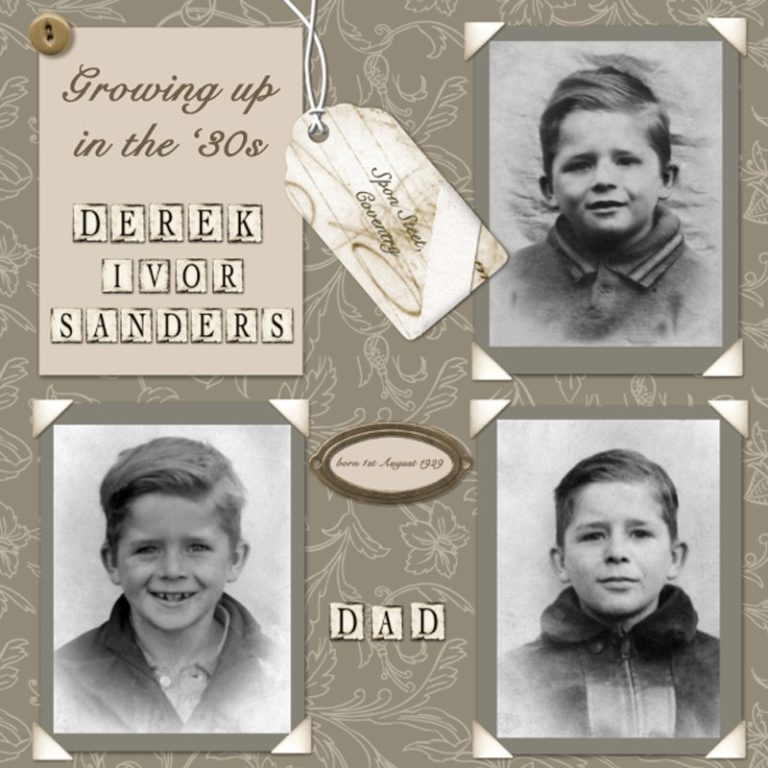 My Dad was a posthumous baby.  His own Dad died in 1929 from influenza, at the young age of 33, just five months before Derek was born. What seemed extraordinary to me growing up is that Dad knew nothing about him at all, only his name – Walter. He’d apparently never asked questions about him or even seemed interested to know about this missing part of his life.

By all accounts it was a tough childhood. Two elder brothers and later a half brother, the four boys were brought up during chaotic times by their mum, Amy in the slums of wartime Coventry. Dad didn’t tell us much about those times except that he and his mates jumped up and down with sheer delight when they discovered that German bombers had scored a direct hit on his school during the Blitz. Being an 11 year old during the war wasn’t all bad, I guess. I know he was evacuated several times to the country and stayed with families that were, according to my Dad, too posh and/or too strict and he ran away and back to Coventry every time. As far as I can tell the rest of the war was spent with the four Sanders boys running half-wild, playing on bomb sites around the city while Amy held down a job at the local munitions factory.

The image above is part of collection of digital scrapbooking pages that I put together several years ago and this particular page includes three school photos of my Dad. I’m intrigued that, even living on the poverty line Amy managed to afford to buy school photos. I definitely recognise my Dad in the first photo, not so much in the second….but the last photo is very much Derek, trying to be serious and not to break into a laugh. Its a look that strikes as chord with me as I remember him trying to tell me off for some childish misdemeanour and not quite managing the straight face. My Dad died in 2005.