170 years ago this month Jabez Rainbow lost it.

He had taken a room at The Boot public house in St. Albans, Herts, England for a night with his girlfriend, Jane Pearce.   Jabez was a soldier and stationed in the town working as part of a recruitment team.  He was billeted at another pub a couple of streets away but occasionally took a room at The Boot to be with Jane.  On the morning of 3rd October 1841 while Jane was sleeping he took his shaving razor and calmly sliced her throat.  Needless to say this woke Jane who, at first, appeared not to feel pain but rather a choking sensation and as she put her hands to her throat felt them “go right in” to her neck.  A violent  struggle ensued with Jabez straddling Jane who silently (her vocal chords had been severed) kicked and hit out at Jabez gaining more wounds to her hands, arms and legs.  It was over as quickly as it started with Jabez suddenly releasing her, running to the door of their room and calling down to the landlord, “Murder” and “Come take me.”

There are several surprising elements to this story.  One is that Jane survived her injuries, thanks to the prompt attention of a surgeon who lived nearby and another is that she appeared to express no anger towards Jabez at his trial.   The case itself caused a sensation in the town with crowds gathering,  all eager to see the victim as she arrived in a carriage, escorted by the police and her doctor.

Jabez escaped the capital indictment and was ordered to be transported to Van Diemen’s Land (Tasmania) for 15 years for the offence of wounding.  Although the case was widely reported in the press there are many questions that arise from reading the articles for example, why did his friends and Jane all say they had never seen him drunk and yet on his convict record he states that he had been drinking for several days?

I don’t have any photos of Jabez but the image below is an impression of what he may have looked like based on photos of other family members and a comprehensive written physical description on his convict record, eg nose – broad, mouth – large, etc.

Jabez is my 3rd great grand-uncle. His background, trial and life in Tasmania form part of my book ‘Chasing Rainbows’. 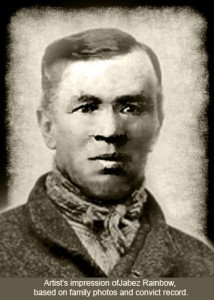